When embarking on expeditions of any kind in the outdoors, including hunting, having a proper knowledge of the best rope knots to use for different situations is very important.

Rope knots are something that can and will be extremely useful when out on a hunting trip of any length. Being able to use the right knot or set of knots in the right place can make carrying gear, setting up camp and overall having a successful expedition a lot easier. In some cases, making sure you know your knots could potentially help save a life, even your own.

Now is the time to go about learning, practicing and perfecting your knot knowledge and knot-tying skills. Make sure you are as prepared as possible to execute on these knots when a situation arises and you need them the most.

Lets go over 10 of the best hunting knots that you should know about.

The square knot is in many cases considered the most commonly used knot of all time. If you only end up learning one single type of knot, make sure that it’s this one. The square knot, also known as the reef knot, can be used to combine two similar sized ropes together, or to just simply tie off a knot on a single rope.

The easiest way to remember how to tie a reef knot is a right-over-left overhand knot, and then a left-over-right overhand knot. Two very simple ties. However, make sure you do them in the right order so you can untie the knot when the need arises. 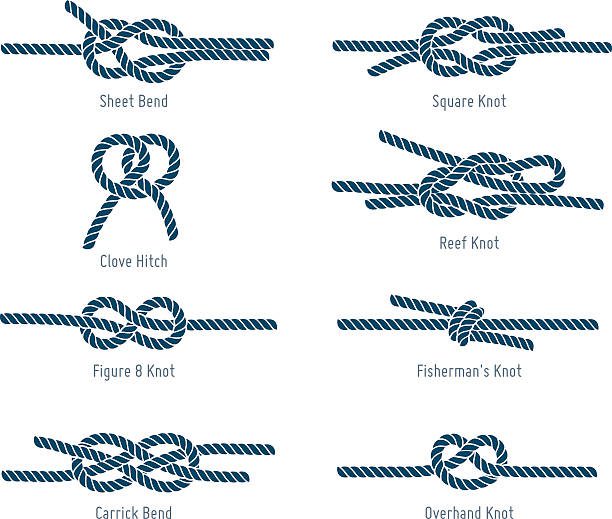 Similar to the square knot we just discussed, the sheet bend is used to connect two different ropes of relatively the same size. The ropes can essentially be made of any type of material and can be various thicknesses. The sheet bend can come in handy if you happen to run out of rope and need to improvise. There are however a number of other knots that can do the same thing.

Start by making a “J” shape out of the larger of the two ropes. Pass the smaller rope through the middle from the back side. Proceed by going all the way around both sides of the “J,” and then finish by passing the smaller line back underneath itself.

The clove hitch is an incredibly fast, easy and effective knot to tie and use. A clove hitch can be used in order to quickly secure a rope to a solid structure.

Start by making a loop around your structure with your rope. Next, make another loop. Finally, pass the end of the rope under the loop before you tighten. This knot can come undone if the tension is released, but you can add another type of knot for extra security.

The Figure 8 is considered to be a stopper knot. These are used to tie at the end of your rope. The figure eight knot will prevent your rope from passing any further than you want it to, based on where it is tied. It is also used as a base knot in more complex knots, so getting it mastered is a great step.

To start, take the end of the rope and pass it over itself in order to create a loop. Next, pass it back underneath the main line and then through the first loop. If you see a figure eight shape appear, you have done it right!

To start, simply  wrap the end around your structure and make a half hitch. Next, wrap the line again in the same direction in order to make a second half hitch. Pull it nice and tight to make sure it is secure.

The taut line hitch is a good knot if you have a situation in which you want to grip one object and then fasten or pull it tight to another object. It is useful when the line you are using needs to be adjusted multiple times in order to maintain the necessary tension.

To start, make a loop in your rope by wrapping it around the object you wish to tie up to. Next, using the end of the rope, wrap around the rope twice, proceed back over the loop, around your rope and then back through the loop. From there, pull it tightly secured onto your object. The taut line hitch can eventually come loose, so a square knot can be used at the end for more strength if needed.

Why use this knot?

The rolling hitch is used to attach a rope to a pole or to another rope. It is considered a simple friction hitch that is designed to resist lengthwise movement in one-single direction.

The rolling hitch is actually made up of three half hitches. Start with the end of the rope that you are adding. Wrap it around the other pre-existing rope in order to create a half hitch.  Next, make a second half hitch. Finally, pass over the entire knot with the third half hitch, being sure to end on the side opposite from the starting point.

The Prusik knot creates a loop that can be used to attach to another rope. This loop can be used as an attachment point for a second rope when both ends of the primary rope are occupied. The Prusik knot can also be used for ascending and descending because of the fact that it moves when there is no weight or tension, but tightens when tension is added.

In order to tie the Prusik knot, you will only need a short piece of the existing rope to make your attachment point. Start by tying a square knot on your attachment rope. Next, wrap that rope around the pre-existing rope three times. Make sure it is laying flat against the larger rope, and then pass the knot through itself and secure.

Moving trees or timber is sometimes an important step in clearing paths and building stands or blinds while hunting. The timber hitch is a fast and easy knot that will allow you to move timber safely and efficiently when the need arises.

The bowline knot creates a loop on the end of your rope that will consistently stay the same size. It will not tighten or loosen with use. The bowline is often used in small craft sailing as well as in many rescue efforts.

The bowline knot actually has a step-by-step explanation that has gained fame as the story of the “rabbit hole”. To start, make a loop near the end of your rope. In the story, the loop represents the rabbit hole, while the line represents the tree. To complete the knot, the rabbit comes up out of its hole, takes a run around the back of the tree, and then finally goes back down into the hole. Pull tight at the neck to secure your loop size.

What Is The Most Durable Knot

The Palomar Knot is considered the most durable knot in many situations. With only 3 steps needed to tie it, the Palomar Knot is super basic and very strong. It does not have many bends or kinks making it extremely tough to break.

What Is The Most Common Knot Used

The square knot, also known as the reef knot, is the most common knot used for a number of things. It is considered a type of end knot and can be useful for securing packages and other large objects, as well as in medical situations for tying bandages around wounds and preventing bleeding.

What Is The Easiest Knot To Learn

Although there isn’t really a distinct winner, the figure eight knot is often considered the easiest knot to learn. It is one of the most simple and easily explained knots that exist, yet it still has a number of really great uses. It is also quite easy to evaluate the knot while you tie it and spot your mistakes right away. In the end, the figure eight appearance will allow you to determine the accuracy of your knot immediately after tying it. Learn this knot as one of your starter knots as you begin to develop your skills.

What Is The Best Stopper Knot

Stopper knots are very important in many activities and scenarios including rock climbing and other extreme sports. The best stopper knot in many opinions is the double overhand knot, which is often used over other stopper knots because it is less bulky. Stopper knots are used to back up other knots, for belaying, to join two ropes together and in rappelling setups.

Having a solid knowledge of useful knots is not only important for hunting and other great activities, but also for any number of survival and potential life saving situations. In a world that is constantly driven by advancements in computers and technology, knot tying is still an incredibly important skill set for people to consider developing.

Take into consideration these 10 hunting knots you should know about. Practice them and be prepared to execute if and when the time comes.

Arthur Anderson grew up in rural Indiana, where he spent much of his time going on hunting trips with friends from a young age, and braving the outdoors to get the most authentic hunting experience possible. Now, a family man and dedicated man of God, Arthur shows his children how to live off the land while simultaneously hunting with his brothers and friends whenever the opportunity presents itself. Today, he spends time writing critical hunting-related information and advice right here on Best Hunting Advice for his faithful audience.

Download our FREE pdf guide and learn what decoys you should be using.